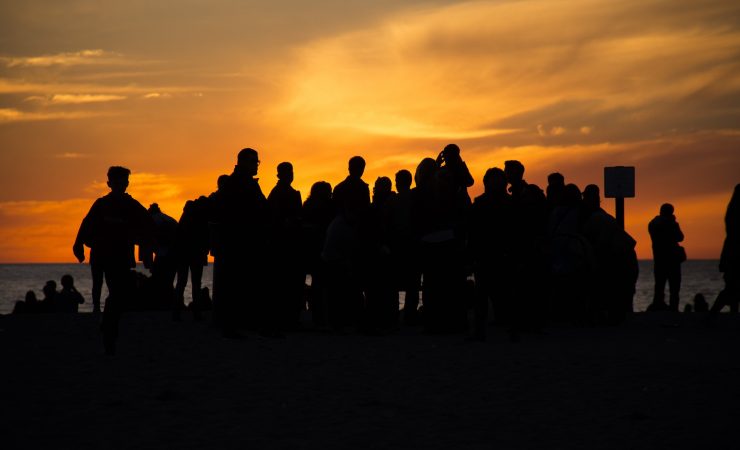 One of the biggest and most harmful lies cultivated by my profession is that healing, happiness and success only come from within.

This is profoundly untrue, and never has unpacking this untruth been more relevant than on the day a disgusting man has been made President of the USA.

I’m not American. I’m a white Australian woman who turned 37 years old today. I’m dangerously close to being of the demographic that elected this person. Yet I feel deep pain.

If you just stop and look and feel, it kind of puts all the nitpicking of the fractious left and the neoliberalist debates into perspective. I mean really, just STOP, look and listen and feel.

I’m watching videos of people whose lives are at risk today, tomorrow and next week because of this hatred and ugliness.

Make no mistake: the figurehead matters.

What he says matters.

Who he says it about matters.

When he threatens a community, it matters.

How he’s acted publicly over his career matters.

So what can we do?

But we all know there’s a lot more to be done.

And doing it might be your ticket to healing and meaning.

This book written by one of the most famous African American feminists provides us with some context for feeling a way through this- gain direction- by living wholeheartedly in pursuit of an ethic of love. She explores the why’s of narcism and selfishness, as well as sharing a personal memoir and journey. Love is a verb: an action, a doing word- not a saying word. Read it- you won’t regret it.

On looking outwards and what you gain…

Humans are a social species. Even those of us who enjoy our solitary time, who are shy or introverted or loners will generally do better when we are a part of something.

You Are Not Alone.

There is a uniqueness to ‘you’ of course, but never even for one minute believe what people like Trump would have you believe: that individualism is the key to success.

When you lock yourself away, when you stay silent, when you are ruled by fear or lethargy, when you buy into the rhetoric then these bullies win.

If you are suffering, reach out!

Narrative Therapists and practitioners talk about ‘communities of solidarity’ and ‘Alternative Justice’. What this means is that humans do not exist inside our brains. We are part of the world. That world is unfair and privileges the rights and knowledges and ways of being of very few. We are not easily exposed to ways of being that are not decided by those few, and many suffer in very real ways because of that unfairness. We are impacted by that world, and the way we feel is not decided by brain chemicals alone… or at all I might argue.

It’s all in your head: That’s the lie.

The truth is, you CAN find your people.

And if you aren’t those targeted people, then find a way to stand alongside them.

There are protests and groups meeting all over the USA today. If you are American and you are feeling pain and anger, take yourself to one even if you wouldn’t normally. Or watch videos online if you can’t go. Cheer. Aloud.

Perhaps spend some time finding others online who aren’t your same-race-sex-gender-body friends. It’s pretty easy: check out hashtags #NotMyPresident #blacklivesmatter #wegohigher #ThankObamain4Words #ImStillWithHer. Read their stories. Click on their links. Grasp their experience. Don’t try to speak over them or protect them or ‘splain to them. Listen to them and what they’re asking. Do what you can in your own ways to align yourself with them. Keep following. Keep listening. Share what they write. Write comments showing support.

You Are Not Alone.

Go into your heart be brave and vulnerable and honest and judge from this place and no other.

If you are stuck, you can find professionals who understand this social context and help you unstick so you can develop an Ethic of Love.

On a daily level, there’s a lot more for people who are less vulnerable to do.

A couple of years ago I was on a scuba diving trip. One of the Divemasters was a straight Canadian bloke who was loudly making comments about women and gays. I actually can’t remember what he said, but I can remember my blood boiling at the same time as feeling totally paralysed. He was talking to his mate who wasn’t really joining in. Other than his friend, his entire audience were women and gay men. When I asked my gay friend about it later, he shrugged and said something like ‘I don’t even hear arseholes like that anymore’.

It bothers me to this day that I didn’t say anything.

The problem with the Alpha Male thing is that there are a HUGE amount of people standing around while the Alpha Male- or the bully- is talking this garbage, and we’re all too afraid to say anything.

Sometimes though the fear isn’t real.

This guy wasn’t harmful to me, I could have said something.

There are many, many times when men tell me about experiences like this- when a man in their company (or any person spouting a hate speech) is dominating a group, and yet no one says anything even though they were uncomfortable. Therefore it’s implied that (A) we all agree and/or (B) this person is more powerful than us.

Mostly though, it’s just awkward and socially risky rather than actually dangerous to speak up when that’s happening.

If you ride the discomfort and then speak up anyway you will feel good. And you WILL BE MAKING A DIFFERENCE.

Ever wonder how the gay community made such leaps and bounds in such a short time? One brave coming-out at a time, to family who have to check themselves and choose love over fear and hatred. Most choose love, and if they don’t there are hundreds of people out there who will love you.

Fathers, call your sons out kindly but honestly on bad behaviour towards girls. Ask them about it. Engage. Don’t pretend it is not about women, and that ‘you’ aren’t obligated to address it just because ‘you’ didn’t cause it (the same way ‘I’ didn’t vote for Trump). Your people did, our society did, and you have the power to change it starting at home.

Don’t let fear and anger and individualism rob you of your generosity, love and kindness.

Turn towards people you know and love, and then outwards with arms linked and stand up. And, when we are called to action, let’s all try and rise together and move forwards. We’ll be much stronger and happier for it, even in a climate of fear. #fightlikeagirl is a lesson for everyone.

Online Counselling is for everyone. Get in touch with me or share a comment on this post if you feel the urge. Hatemongering will be deleted though.