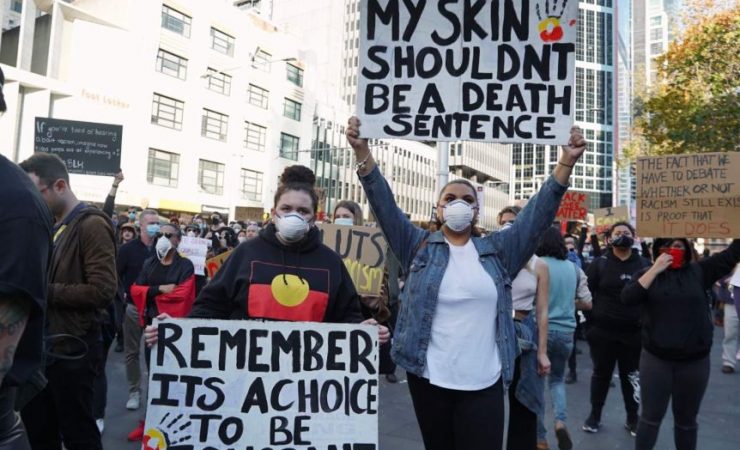 Written on Gumbaynggirr country in Garlambila. As a non-indigenous woman I acknowledge the traditional custodians of this land and pay my respect to Elders past, present and future and extend that respect to all First Nations people.

Have you travelled overseas and had a sudden deeply felt realisation you could live in that country forever and never really understand the people and the culture? That feeling is familiar to many folks living in Australia, including the traditional custodians of this land our First Nations people.

To fully appreciate how that might affect someone’s wellbeing, we need to understand white privilege, intergenerational trauma and racism.

Privilege isn’t just about wealth and opportunity, it’s also about whose way of doing things we value the most.

We live in an Anglo-dominated country and to some extent an Anglo-dominated world. Many of us struggle to imagine existing in a world where almost nothing is in alignment with what we believe is important, is innate to us, or what our family and community value.

Our leaders, schools, screens and lifestyles reflect a hierarchy of who Anglo culture cares about the most. The more ‘successful’ by these standards you are, the more respected you are. We even judge others in accordance with these values, looking at each other through narrow lenses decided by those who want to control us.

We accept as ‘fact’ that ‘success’ is about money, work ethic, power and individual acclaim. We consume, compete and crave more and more and more.

This model of success is not correct. It’s just a construct.

Couple this mismatch of values with the impacts of intergenerational trauma. “If people don’t have the opportunity to heal from trauma, they may unknowingly pass it on to others… Indigenous people in Australia have experienced trauma as a result of colonisation, including the associated violence and loss of culture and land, as well as subsequent policies such as the forced removal of children.” (from The Healing Foundation)

I’m sure a lot of folks I work with can relate to struggles from impacts of intergenerational trauma. But consider this:

How can people heal from past trauma if they continue to be subjected to new trauma on a daily basis?

From 432 (and counting) blak deaths in custody to institutionalised racism to micro-aggressions in the local supermarket to being trolled on social media (as happened to musician Emily Wurramara just this week when she was passed the mic from Amanda Palmer on Instagram) to walking past statues on every corner revering ‘settlers’ who murdered, incarcerated, raped, policed, invisibilised, silenced, separated, stole land and stole children from, and tried to wipe out Indigenous life adds to the constant traumatising of a people who remain incredibly strong, but deserve all of our support to address the injustice.

Let us begin to acknowledge the ways in which privilege leads to racism and work to minimise suffering.

We are used to understanding racism as a simple concept because the dominant culture gives us permission to see it this way: you aren’t ‘racist’ if you don’t [insert atrocity]’. But racism is endemic in our culture. It enables all of us, including police, to see Aboriginal and Torres Strait Islander (TSI) people as ‘other’ or ‘less ‘than’.

When you don’t understand the impacts of trauma or what it’s like to live in a land where your voice is silenced and your values are dismissed. When you don’t listen and learn from teachers who are not of the dominant culture, it’s easy to go on pretending you are not racist and the problem lies within the communities being affected by an unjust and inequitable society.

But when lions write history we only get their side of the story.

Tyson Yunkaporta, a member of the Apalech clan, examines numerous ‘truths’ we take for granted from a decolonised perspective in his book ‘Sand Talk’. From how time works to the ‘invention’ of the teenager to the Neanderthal to myths around violence and who is permitted to perform it.

Perhaps though one of the most illuminating concepts is in his simple answer to the age-old question Why Are We Here? Yunkaporta answers it very simply: the role of the human is to be a custodian of the earth we live on.

Imagine, now, that your entire worldview is founded on this belief: You are here to take care of the earth. How might that shape your every day life? Your relationships? Your choices?

Who would be considered leaders if this was our worldview? What would become less important or even worthless?

Some things spring to my mind: money, power-over, violence used to control, bosses, work, buildings, growth, greed, and even the notion of ‘the individual’ all fade into the background. Taking care of the earth requires co-operation, understanding, listening (to creatures, land and waterways as well as other humans) wisdom and love.

The continual messaging that some lives are worth less than others is appalling but it is not peculiar to a society with the values of this dominant culture.

We must deconstruct our entire way of understanding our position in the world if we really want change.

It starts with educating ourselves. This doesn’t have to be painful although certainly at times it should be uncomfortable.

On the hilarious NITV art quiz show Faboriginal hosted by Steven Oliver we discover just how much we don’t know about our history. The stories, language, culture and knowledge that could be available to us if we were only willing to explore, and consider what is really important. Robbie Hood on SBS is a heartwarming comedy series created by Dylan River which tosses some accepted myths out the window about kids in Alice Springs… like who is really helping who in the foster care system?

The new podcast Always Our Stories created by Kamilaroi/Dunghutti woman Marlee Silva (of tiddas4tiddas on instagram. FYI: tidda is the Koori word for sister. I live on Gumbaynggirr country where the word for sister is jinda. Side note: the Gumbaynggirr word for eight is janya which is short for octopus, how cool is that?) is a collection of thought-provoking and warm interviews with a wide variety of Aboriginal and TSI folks. Did you know Aboriginal people were the first scientists? Or that in defiance of elitism there have been Aboriginal debutante balls since the 1950’s?

Update 25th Aug 2020: There has been issue raised by Aboriginal women with the Silva sisters regarding tiddas4tiddas. It is not my place to have a say in that space, but I would be remiss to be silent here as the tiddas4tiddas instagram has suggested there will be legal repercussions for First Nations folks who asked for accountability. I hate piling onto callout culture, but whatever the issue, legal threats with no public engagement on the topics are very concerning in that kind of space. In a blog post about BLM and the dangers of enforcing colonising practices in a racist world, it would be at the very least problematic not to offer alternative voices. If you wish to understand the politics, and dismantle a whole lotta myths about First Nations folks, expand a sense of what beauty is, catch a little comedy, find some products, and also connect with amazing people to support, you can follow women such as: amymcquire_, 8983aj, ithinkceleste and soju_gang to name a few.

We may find this engagement exciting if we think about not only dismantling our own privileges, but opening our minds to other possibilities. Other ways of living that might be more in alignment with how we want to be in this world.

Justice-doing can be good for your mental health if you step out of isolation and into community. If you say ‘these are the values I want to live by, I will stand up for, and I want to find others who are doing the same’. It doesn’t mean it’s not hard or scary or sad or infuriating or risk-free. But it does mean you are not alone, and loneliness is the biggest pandemic.

Loneliness is a pandemic that our leaders quietly condone because when you are alone and afraid you are easier to control. You comply to the norms of a capitalist industrialised atomising society.

The Black Lives Matter revolution is an opportunity to not only insist on justice for murdered black and blak folks at the hands of those in power; to stand up against racism and be a true ally in whatever way is available to you; but to reconsider the value systems that have encouraged these violences in the first place.

We can’t allow people in positions of power to do anything they want in the name of ‘protecting’ us or ‘providing for’ us.

We need to stop policing each other in accordance with the values and rules of the dominant culture.

Please friends, stop dobbing on each other!

It’s very probable that these value systems don’t serve me, you or most others if we want to be (mostly) happy and content. There’s a whole world of healing, connection, love and possibility in our futures if we’re brave and humble enough to welcome radical change.

Reading, watching, listening to and then Showing Up For is a small part of the healing process but for real change in society, we need to value not just the lives of First Nations people (although that’s a damn good start), but their ways of doing things that differ from what is currently valued in this society.

It is my belief that our collective heart space will improve if we do so.

Visit Path to Equality for a comprehensive directory of options to support Aboriginal and Torres Strait Islanders including petitions to sign, articles to read, artists to buy from and donations you can make.