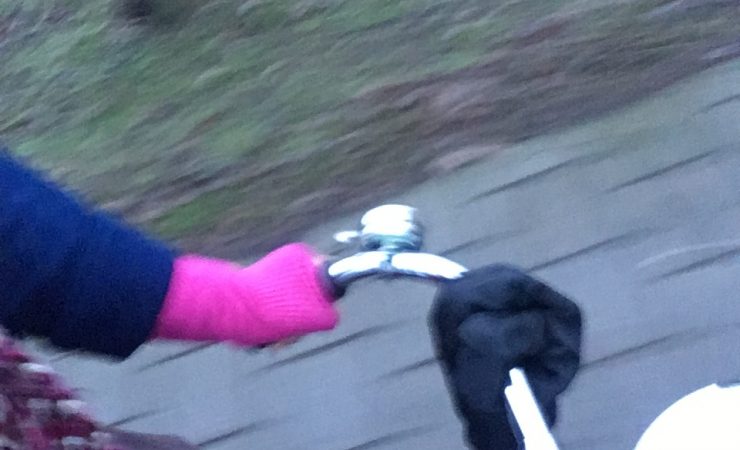 Check out that look of terror! Live mental health tip for women from Amsterdam about trying new stuff, finding your brave, embracing everyday feminism… or putting the fear into you lovely folks. I’ll let you be the judge.

I was inspired today, in the middle of trying to cycle in the city of cycling when it’s been FOREVER since I rode a bike, to make a really quick video for you all about being brave.

This cycling attempt reminded me what it feels like to do something- no matter how small or large- that is unfamiliar, even when it’s completely ordinary to everyone else.

And also letting yourself feel good about that.

We’re never ever ‘enough’, and that can be paralysing, can stop us from moving towards anything for ourselves.

Feminism is about choice, right?

It’s about being brave in whatever your truth is to do something that is a response to what women are ‘supposed’ to do.

That doesn’t mean do something you DON’T want to do: it means being thoughtful about the choices you do make, and trying to make them from a position of self-respect and unconditional positive regard for yourselves and one another.

More broadly, feminism is about having equal access to human rights and not be treated like second class citizens, politically, personally or socially. As a movement we aim towards ending violence against women, the discrimination and exploitation of all women, and demanding justice for all intersections in our community. Addressing dominant power structures and breaking them down (like women and men all over the world are doing very loudly at this time in history) is a key factor in the success of the movement.

Can leave a girl feeling overwhelmed… like what do I do? How can I even begin to get my brave on when I feel like this?

Sometimes we start with the tiniest of actions.

Everyday feminism, while shooting for the big goals, can start with small stuff. Coz feminism is for everybody- that’s the point.

You don’t have to show up screaming and shouting at the next Women’s March [unless you want to!].

But if you want to take steps towards feeling just a little bit braver, and be reminded that you CAN do new stuff, then this little video might inspire you in it’s raw wobbliness.

I was myself inspired by a woman who told me she had never tried Thai food, and another who told me she’d never been to a cafe by herself. Both of those women- with nothing in common but being survivors of domestic violence- decided to take themselves out, try something new, and feel good about being brave (and bucking crazy anxiety).

When they made those choices, they said ‘no’ to being controlled.

They said ‘yes’ to being part of something bigger… something that doesn’t accept violence against women.

I wonder what your brave little or big action will be this week? Feel free to share it below.

If you liked this video, sign up to my list to get more tips on subjects like how to get a bit braver in your everyday life. And if you’re looking for a counsellor or just want to ask me a question, please don’t hesitate to get in touch. I’d love to hear from you.