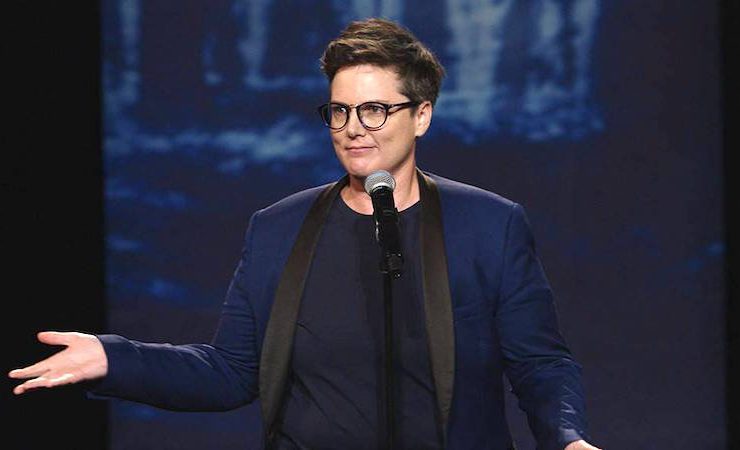 Hannah Gadsby’s Nanette is a game-changer.

But I was almost a full half hour in and not quite sure why so many clients, friends and colleagues had gotten in touch: “You need to see Hannah Gadsby’s stand-up comedy special Nanette on Netflix. It’s [insert chosen magnificent superlative]”.

I mean, it was good. It wasn’t hilarious. She was talking about themes that matter to me but otherwise I wasn’t sure why it was so important.

Then the tone changed.

I realised what had come before was to prepare for this.

And it’s not because I was laughing so hard my belly hurt (FYI: I’ve seen Gadsby live and she is MORE than capable of getting the belly-laughs, so let’s be clear that everything she does in Nanette is a choice).

You need to know something:

Gadsby invites us to take a journey with her. Along the way she explains how the journey works. She explains this in terms of some essential comedy 101: she actually gives us the map. It explains why, as the comedian and leader of this journey, she does what she does, how it works on us and why.

Then… she draws a new map.

I don’t want to give too much away, but there’s a core word Gadsby uses throughout Nanette that I found particularly evocative:

You learn from the part of the story you focus on. I need to tell my story properly

I found myself wondering, as she retold some of her past stories, about other female comics. What part of their story do they have to sacrifice in order to be “funny”?

How many folks are held in a state of arrested development by the telling of a story in the same particular way, over and over, without disruption?

This is actually the core belief of Narrative Therapy too, though the hardest to explain, and Nanette helped me understand more of WHY it’s so hard to explain.

Gadsby exposes the darkness and limitations of our current culture as she tells her real stories in a raw, unapologetic, and (very importantly) non-self-deprecating way.

She shows us how the culture holds us hostage within looped storytelling.

And she exposes why we can be convinced that it is our fault if the story doesn’t have a positive spin.

Well, Gadsby refuses to be co-opted into that culture for one minute longer.

The results are extraordinary.

We are taught to hate ourselves if we are, in any way, different. When that hatred is absorbed, it’s extremely hard to stand up for yourself. You can know in your head that something is not right- but to believe it in your heart and take action from that belief is so much harder.

Because the truth is, the dominant culture of which we are all heavily influenced by, doesn’t want your story to change.

And by ‘story’ I don’t just mean how you feel about yourself based on your own internalised problems.

I mean- and Hannah explains- that a world where we care more about someone’s role and what they make with that privilege and less about humanity; where a man’s reputation is more important than the life, wellbeing, and dignity of women and children, THAT story needs to change.

Gadsby urges from the depth of her heart and the power of her full, true, story to DO SOMETHING about this culture.

In my work as a counsellor and Narrative Therapist, when turning points occur, women find ways to stand up for themselves and others who share a similar story.

This happens when they feel their worth. The growth of a deeply-felt belief that they are important because they are human. [FYI: This is also a better place than a self-hate one to make personal behavioural changes from if you desire].

Much of that feeling comes not from some ‘dysfunctional psychological’ change but from genuine recognition of an unfairness in the society we live in. They aren’t at fault for the wrongs that were done to them.

When we’re exploring stories in narrative, we are looking at them differently. We are not taking away the ways you were victimised or your full story. But as Gadsby says, you learn from the story you focus on.

So we look at the neglected moments, the ways you responded.

Your stories can be enriched by another’s curiosity about the part that is not told. There is a real humanness about sitting with another person, being curious about their story. It has the strength to embolden.

Your humanity qualifies you as a person who gets to share her story, to speak up, whose story matters, whose rights matter. This is a far cry from the message ‘you are powerless and unimportant and you must do everything you can to stay small, make people like you, and not step on anyone’s toes’.

It’s a wonderful thing to bear witness to.

However I am more and more convinced every day that it is the people who are perpetrating crimes against other humans that need to change. And as a society we ARE changing that, by being unapologetic and relentless and telling our stories across all spheres.

Just recently in season 10 of RuPaul’s drag race, contestant Blair St Claire told his story of being raped as a teenager, how he felt ashamed and dirty, and how he still wrestles with that horror today. This femme man now celebrates surviving AS a femme man, and shines and inspires in spite of what was done to him. He also knew his story was important to tell- to the survivors of crimes against gender and sexuality, but also to society: we will not stand for this shit anymore.

There is hope in these stories.

But it doesn’t necessarily lie in the ‘we need to gently invite everyone in to this lovely happy space and then they’ll stop hurting us and making us afraid’ category [coz when has that worked!].

Nor does it lie in the ‘pretend it didn’t happen’ category. Or the ‘keep telling our stories in ways that make us weaker and self-blamey but allow us to fit in’ category.

Gadsby says at one point in Nanette

I will never flourish

It’s a hard moment, because she’s not going to wipe that permanent marker from the white board and make us feel better.

The violations are unforgiveable and unfixable.

She shares this, not to make everyone feel bad, but to lend gravitas to her survival story. So it really means something when she implores [straight white] men to pull their socks up. Every time we feel tired of bothering to stand up, we might remember that someone else will never ever flourish if we don’t.

Every time we try to ‘normal’ a ‘not-normal’ we might, instead, show that person a Gadsby story.

Because I’m so very tired of seeing how alone everybody is.

Nanette also makes it clear that ‘success’ does not equal ‘safe’ or ‘happy’ or ‘content’. Which begs the question: who decided what success is and why are we seeking it if not to attain these very things?

We will be transported to Hannah Gadsby and folks like her every time we are tempted to keep catering to this current dominant culture. And in particular every time we make an excuse for someone’s choice to use violence.

She means business. She needs to do this for herself- but also for you.

This woman who stands before us is making us laugh, but she is blazing. Eyes are wet but words do not shake. She is entirely in control of when we do laugh and when we most certainly do not.

I felt devastated and inspired and strong and broken and majestic all at once.

Towards the end of Nanette, Hannah Gadsby says

Laughter is not our medicine. Stories hold our cure

I love to laugh, and I love to make people laugh absolutely.

But a funny anecdote rarely changes (why would you change something that killed the room the first round?!).

Stories, however, are more flexible.

Powerful stories can change the world. And this really is a world that desperately needs change. Gadsby in Nanette, mesmerisingly, shows us the way. While she’s at it- like those before her using performance as a platform to address the most important issues- she might just be creating a new way forward for comedy.

You can- and should- watch Nanette on Australian Netflix. You can also follow Hannah Gadsby on Instagram here.

If you want to ask me anything about Narrative Therapy, please get in touch with me directly here. You can also follow my free blog on all things cultural/mental health/relationships/feminist/self-acceptance by getting on my list here.